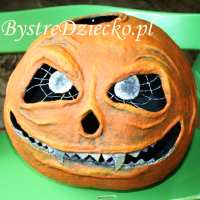 It's already mid-October, which means there's not much time left before our Halloween Party. In many homes there are thematic decorations: pumpkins, bats, spiders. All these little scary, a little bizarre creations. Also in our house this year there are such trivia, behind which the kids go wild. Today I'll show you one of the ways in which you can make a Halloween pumpkin with paper mache. 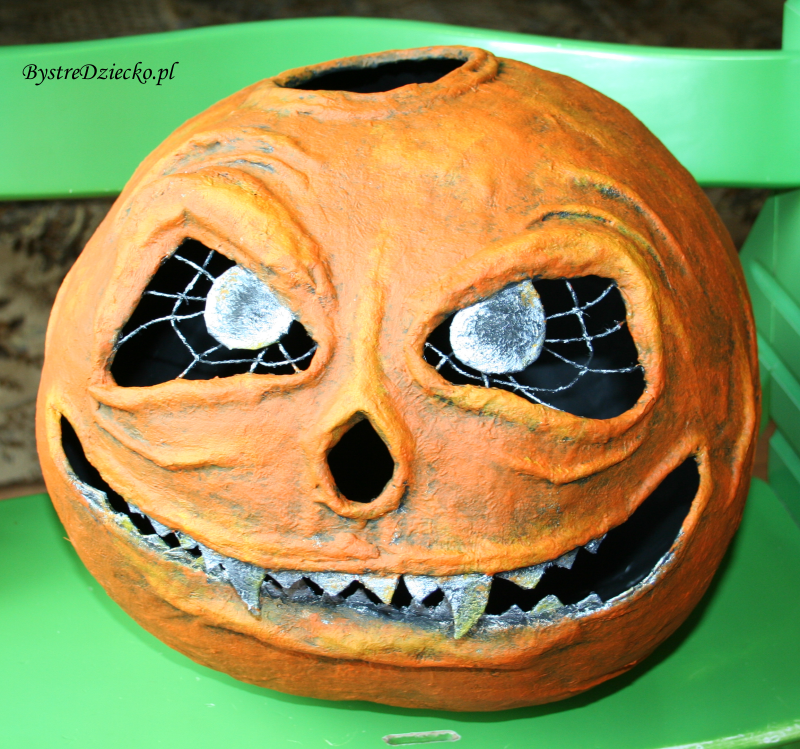 Our Halloween pumpkin will be in the children's room as a lantern. Pumpkin must be the right size, and by the way, must have useful hole at the lamp. Inside could burn a real candle, it's so big. But I think that we all probably think alike, that could be potentially dangerous for children!

Recently, in the shops there were small lights, imitating the candles. That light we put our pumpkin. The flickering light will be well presented at night. 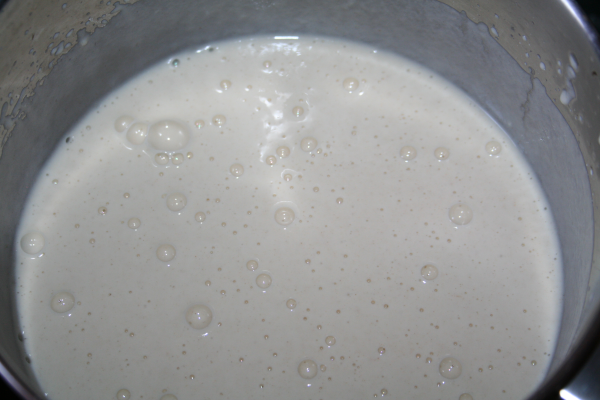 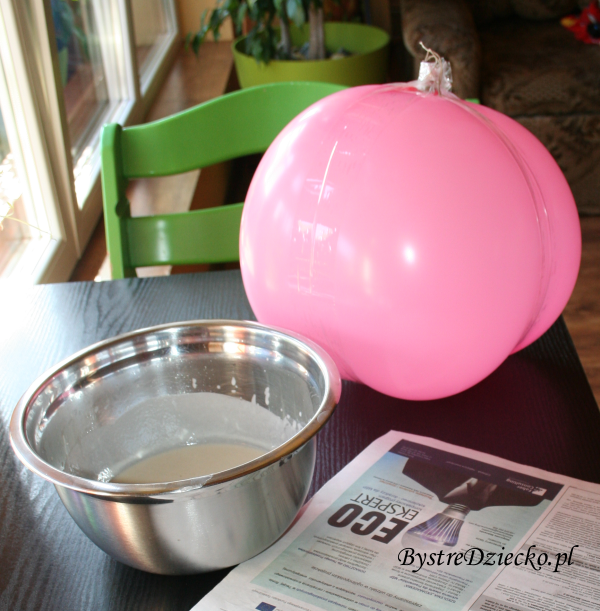 How to make Halloween pumpkin 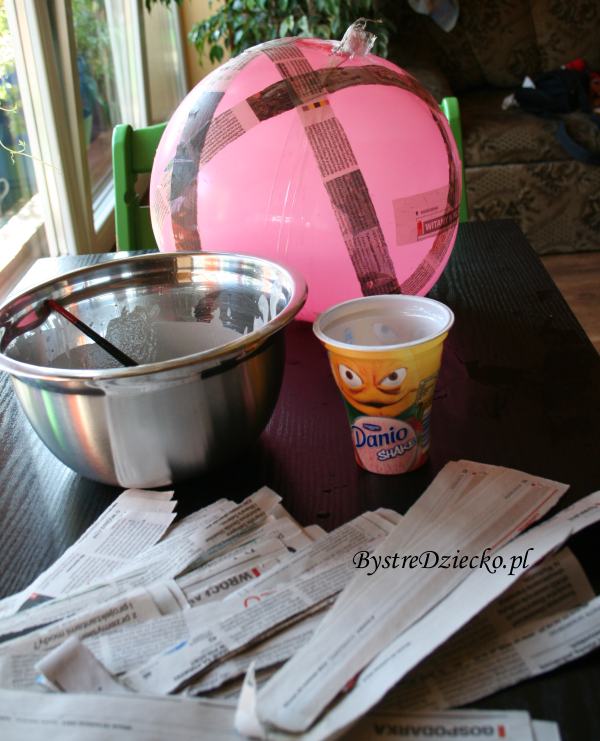 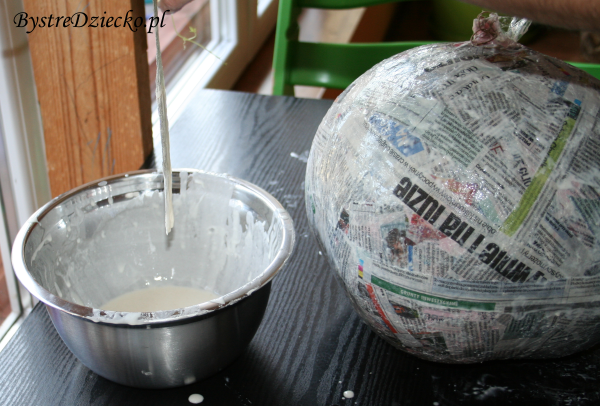 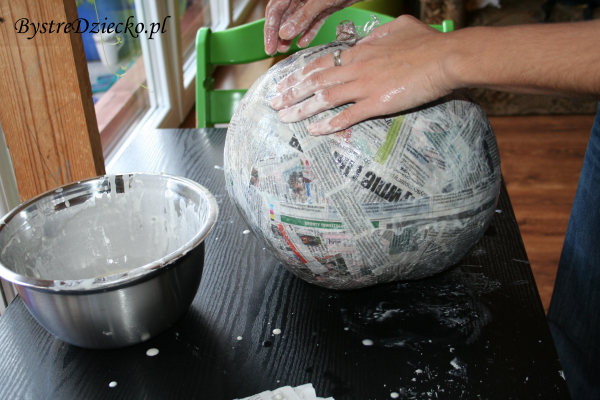 We begin our form. This may be a bag filled with scraps of newspaper or, as it was in our case, a balloon tied with yarn (it can be later removed and re-used) tape glued to resemble a pumpkin. More freedom in sculpting gives the bag, but we didn't have enough scraps to fill the bag.

The first layer of newspaper scraps was moistened only with water. Kids love balloons 😉 and after drying paper mache balloon can be removed and re-used. Alternatively, you can balloon cover with vaseline, and impose scraps soaked in glue.

In the case of the first layer of scraps I tried to make fragments of newspapers do not overlap too often, because he does not stick. However, water was sufficient to attach the newspapers to the balloon. Successive layers were already glued. Long strips of newspaper was soaked in glue, left its excess, and covered the balloon.

To Halloween pumpkin was relatively stable need at least 7 layers of paper, in every place. The base must maintain a heavy load the upper half of the pumpkin, along with decorations ie. an eyebrow. Cut large holes reduces the stability of the pumpkin.

When the pumpkin shell completely dried up, I could cut out holes for eyes and crazy smile of our Halloween pumpkin. For cutting you can also use a utility knife or nail scissors. 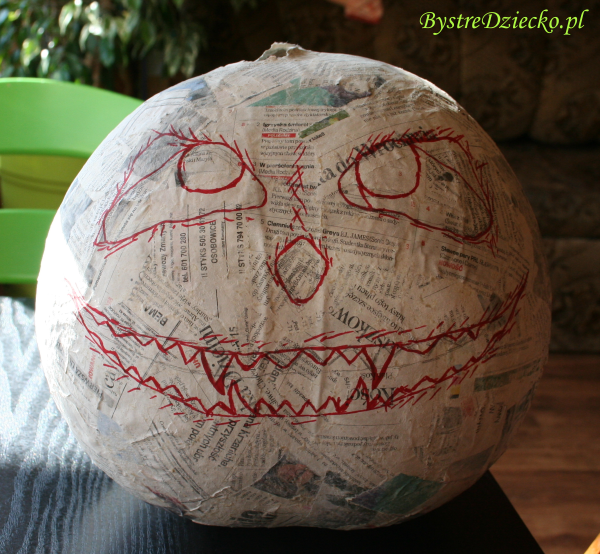 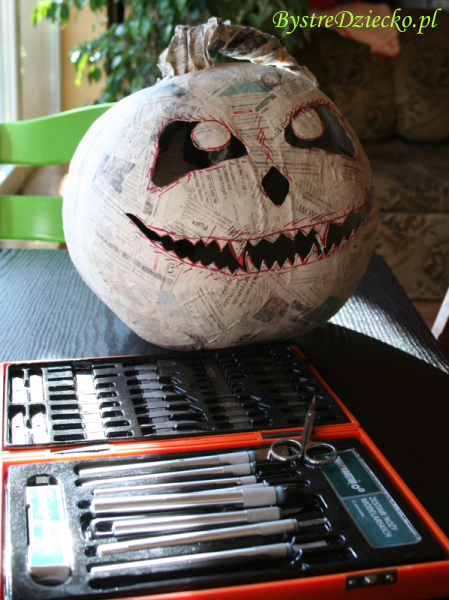 After cutting out the holes, we improving Halloween pumpkin facial area. Because the pumpkin was again soaked and less stable, I put scaffolding in the inside of the pumpkin, sticks. In some places I put on extra layers of paper mache: teeth, eyebrows, lips, nose, cheekbones. 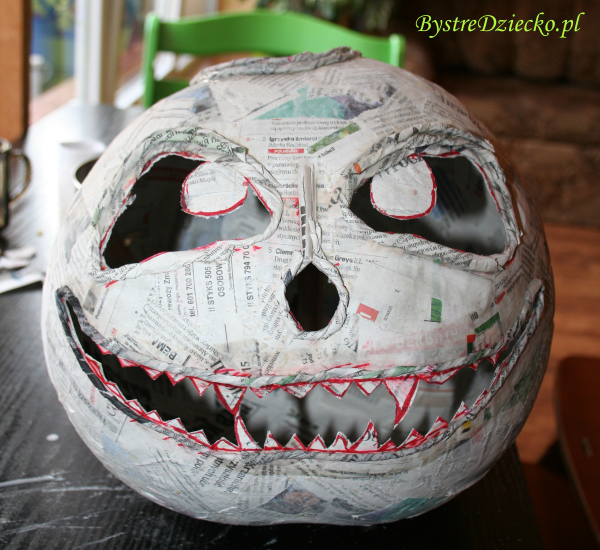 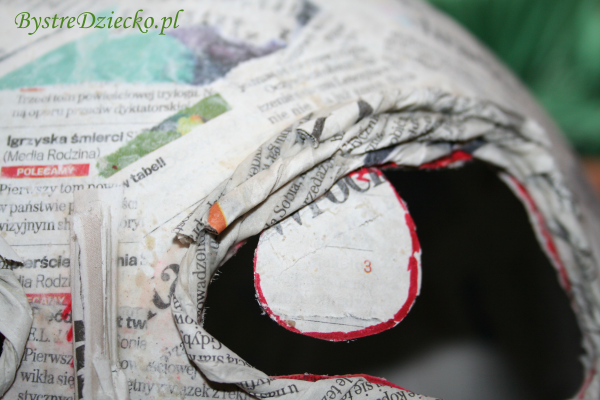 The creation of a Halloween pumpkin face

The holes for the eyes appeared strings that will be imitated spider's web. I glued them from the inside using PVA glue, which proved better here than glue of flour. The combination was strengthened by covering the tip of the yarn with scraps of newspapers. 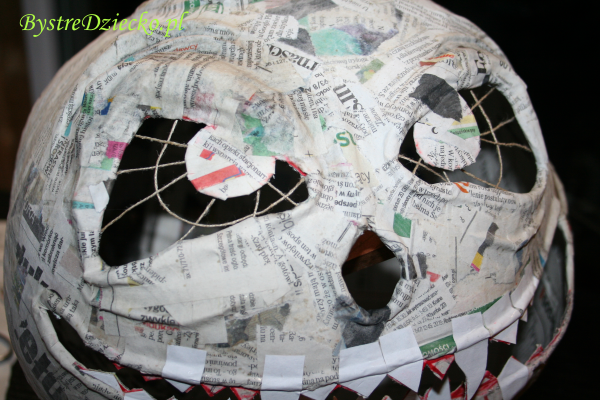 It's time to create a skin for our Halloween pumpkin. This is one layer of paper mache made of toilet paper. 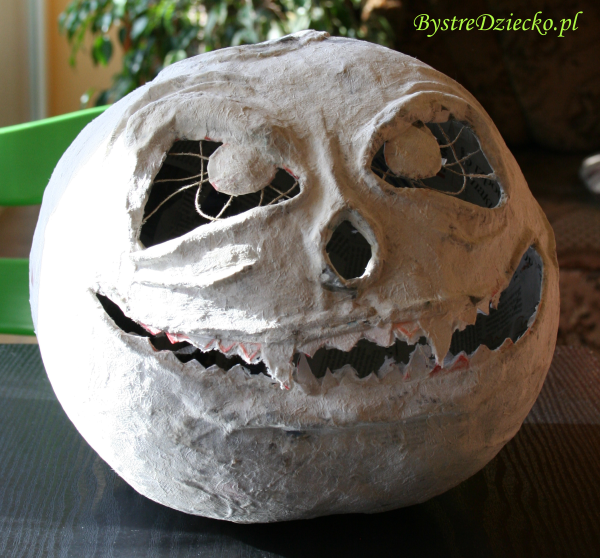 Skin for our Halloween pumpkin made of toilet paper

Now is the time to paint a pumpkin. Here you can use different ideas and decorate it in many different ways. Our pumpkin had been a bit scary and color resembling real pumpkins. It's too early for black and white artistic ideas. 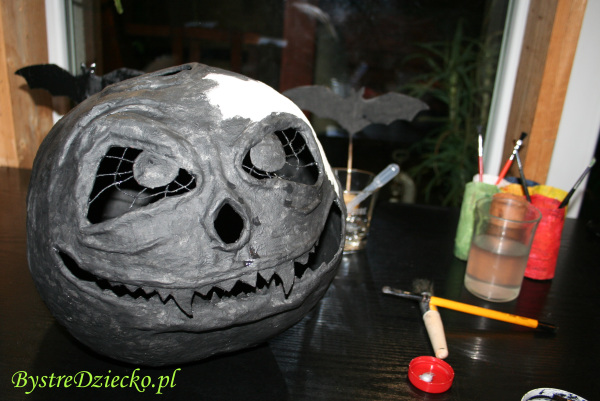 Primer was a black acrylic paint. Pumpkin is also painted inside to get the right atmosphere when you turn on the light inside the pumpkin. There doesn't have to be exact painted. The outer layer must be carefully painted, but does not have to be a thick layer of paint. Just thinned paint, thanks to which will be covered all the cavities of the structure.

Lightening plotted in the form of silver acrylic paint . For this painting is best brush with stiff brush and thick paint. Black primer should be visible to the finished Halloween pumpkins.

I put orange paint with a sponge.

The advantage of acrylic paint is its fast drying . Before starting to paint the lower part of the pumpkin, the top could now freely hold. Therefore, more colors overlap directly one after the other.

The result is a cool Halloween pumpkin 😉
And how do you like it? 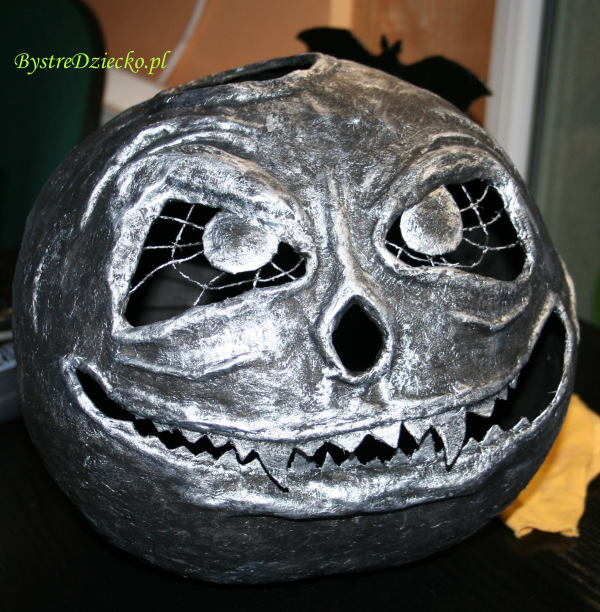 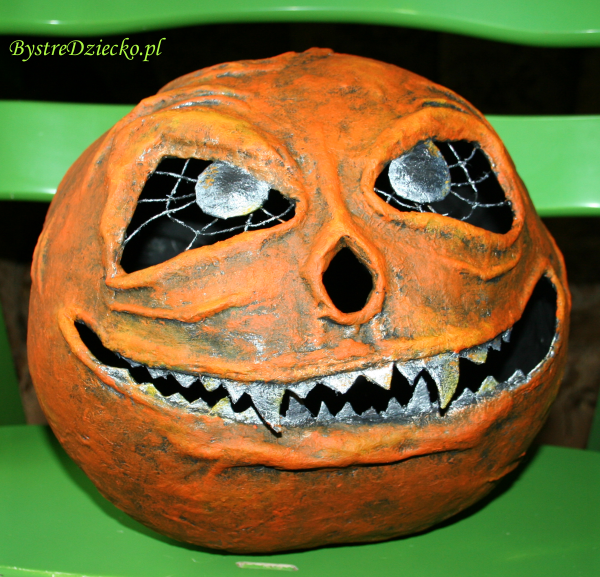 Pumpkin with a painted orange

The final version of pumpkin, painted and slightly scary

Hi. I'm Anna. On this blog I will share with You our inspiration for kids crafts, arts, games and learning activities. I invite you to learn more.

Thanks for visiting us, Anna Kubczak.

Arts and crafts for Kids